Historically, Torremolinos is one of the best-known tourist resorts on the Costa del Sol. The tourist boom starting in the late 50's, which made the Malaga coast and its pleasant climate world-famous, began here, and it has since spread to create what is today one of Spain's finest tourist areas, the Costa del Sol. Since the Stone Age, early civilizations have settled here, numerous remains of which have been found in its caves and grottos. Phoenicians, Greeks, Romans and Arabs have all passed through, finding here all that could be desired in those times: shelter, water, fishing, hunting and an exceptional climate.

The most notable legacy of the Arab period is the watchtower that stands at the end of the famous Calle San Miguel, referred to in a 1497 decree as “Torre de los Molinos” and which has given its name to the locality; it is known today as Torre de Pimentel.

The many mills, mostly flour mills, which operated for many years, are part of the history and the name of Torremolinos (“molino” means “mill”), some are still standing, such as the Molino del Rosario, next to the Torre de Pimentel or the Molino de Inca, near the springs, which has been rebuilt and now used as a reception center, library, museum, historical archive and botanical garden.

Torremolinos' climate is exceptional all year round, due largely to the Sierra de Mijas which protects the town against the cold northerly winds, creating a microclimate with an average temperature of 22 centigrade and over 325 days of sun per year. This means visitors can enjoy the beach and practice open-air sport at any time of year: hiking, bowls, horse riding, swimming, water sports, etc...

A short distance away there are several golf courses and a first-class marina.

As for cuisine, there is huge variety, from the most exotic dishes to the most typical, “el pescaito frito” (small fried fish) which can be enjoyed particulary in Torremolinos and along the coast.

Nearly seven kilometres of beaches packed with restaurants and beach bars, “La Carihula”, the famous fishing area, and the Bajondillo district being worthy of special mention. There are discoteques, bars, flamenco shows, bowling, bingo, etc. to liven up the Torremolinos nights.

With regard to local festivities, there is the Romeria (pilgramage to the local pinewoods) of San Miguel - the town's patron saint. It is considered to be one of the best in Andalucia. Following the Romeria is the Feria (Fair) held in his honour at the end of September. La Virgen del Carmen (The saint of Fishermen) is paraded, by boat, along the beach on 16 July every year. Finally, in homage to its visitors, there are the “Dia del Pescaito” (Fish Day) in June and the “Dia del Turista” (Tourist Day) in September.

Click on the Picture to see a selection of local attractions. 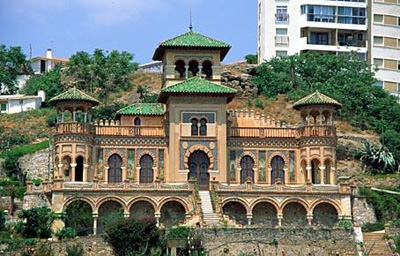